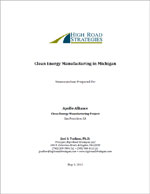 Michigan CEM. High Road Strategies then produced research and policy reports summarizing the trends, status, and policies supporting clean CEM growth in Michigan and in California. Its first report, Clean Energy Manufacturing in Michigan (May 5, 2011), is an overview of clean energy manufacturing activities and policies in Michigan. Over the past decade, backed by significant state and federal initiatives and resources, Michigan has become one of the premier centers of CEM in the United States. This growth built on the strengths of Michigan’s powerful manufacturing sector (especially its automotive, metal fabrication, and machinery industries) and advanced technology capabilities, a highly skilled, experienced workforce, top-rated academic institutions, and rich natural resource endowments. Michigan especially excels in four major CEM sectors, which are reviewed in the report—advanced energy storage (advanced batteries), wind energy, solar energy, and biofuels.

Despite the substantial increase in CEM in Michigan over the last decade, stimulated and supported by state and federal policies and programs, the future health of this sector within the state is unclear. The political environment, both at the federal level within Congress and in the new administration and legislature in Michigan, is decidedly not as friendly to clean energy initiatives that will be needed to maintain momentum in building competitive CEM industries in Michigan. Nevertheless, the report contends that Michigan could enjoy large economic gains with significant new investments in clean energy generation and manufacturing. Moreover, proponents tout the potential for helping to revitalize Michigan’s ailing manufacturing industries, especially auto manufacturing, which has direct tie-ins to CEM-based industries such as advanced energy storage and biofuels. The report further calls for policies that support the demand for and use of clean energy resources while also building up the state’s capabilities for making products used to supply clean energy throughout the economy. The danger is that in the coming years, the United States, and major manufacturing states such as Michigan, in particular, will greatly diminish support for clean energy, while Europe countries, China, and Japan continue to rapidly move ahead in these areas, backed by substantial government programs. 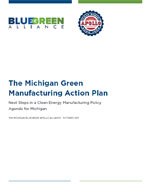 Michigan GreenMAP. The Michigan CEM report was produced as a background reference for the BGA/Apollo Alliance Michigan Green Manufacturing Action Plan (GreenMAP) project. Michigan staff of BGA/Apollo convened a task force of representatives from the business, investor, labor, policy, and environmental communities, which reviewed and approved a set of CEM policies, in conjunction with BGA/Apollo staff, presented in the report The Michigan Green Manufacturing Action Plan: Next Steps in a Clean Energy Manufacturing Policy, released in October 2011. The purpose of the report was to “offer advice on what additional steps Michigan can take to win the competition for clean energy manufacturing jobs.” Research and an initial set of recommendations developed by High Road Strategies provided the intellectual foundation for this work. 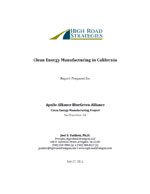 California CEM and GreenMAP. High Road Strategies produced a second research report on CEM activity and policies in California, Clean Energy Manufacturing in California (July 17, 2011). The report reviews the current state of clean energy manufacturing in California, viewing it in the context of its huge manufacturing base—the largest in the nation—and its well-developed clean energy economy value chain. California enjoys a unique place in the nation, if not the world, as a pioneer in the development and adoption of renewable energy technologies. It has a long history going back to at least the 1970s, with both state and federal programs that have directly encouraged and fostered growth in clean energy systems—solar, wind, advanced batteries and biofuels, in particular.

This history has made California the premier state in the nation, and a global leader, in clean energy production and manufacturing. For example, California leads in solar power generation and manufacturing, accounting for nearly half of all solar power in the United States, and is one of six states with large-scale concentrating solar power. It also has the largest number of solar business in the nation—it currently is home to about 30 percent of all solar companies and estimated solar jobs in the United States. 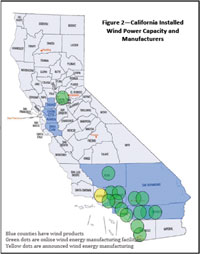 The report also examines the principal federal and state policies and initiatives that have played—and continue to play—a critical role in spawning, developing, and sustaining the state’s clean energy manufacturing sector. It also touches on the challenges and barriers that need to be addressed to maintain and extend this sector, in the face of the worst economic recession—and highest unemployment—the state has faced in many decades, not to mention its severe budget crisis.

The report shows that along with California’s considerable economic, technological, financial, human and natural resources endowments, Federal and state policies have been critical drivers of the growth of California’s renewable energy capacity. Despite the state’s current economic difficulties, recent studies have shown positive trends and projected growth in California’s green sectors. California has pioneered in enacting and implementing policies that made it an early leader in clean energy production, complemented by federal policies that drove the growth of clean energy at a national level.

For example, the introduction of major clean energy policies such as AB 32 and the Renewable Portfolio Standard (RPS), as well as a number of other state and federal programs have spurred growth in California’s clean energy production and manufacturing sector. Over the past few years, the state has instituted several programs to incentivize and assist clean energy manufacturers, with support from former Governor Schwarzenegger and the current Governor Brown, as well as California’s legislature. They include financial incentives and energy–related tax credits specifically targeted to clean energy manufacturing. The state also has supported programs supporting R&D and innovation in clean energy technologies, and workforce development, among others.

Federal programs since the economic crisis have also encouraged growth in clean energy capacity and manufacturing in California. They have provided either direct support to clean energy projects in the state, or funding distributed through state programs. ARRA funding in particular has been crucial in maintaining and/or bolstering the capabilities of existing state programs, both in California and across the country. In some instances, it spurred new programs to dispense the ARRA funds, that otherwise might not have existed.