In a study initiated by the Industrial Union Council, AFL-CIO and the U.S. Business-Industry Council—and funded by the IUC—High Road Strategies conducted an in-depth examination of how the decline in American manufacturing contributes to the erosion of America’s defense industrial base. In contrast to other assessments of the military’s reliance on foreign sources that have only focused on a small number of critical technologies or industries, this study—drawing from statistical data and references from government and industry, the professional literature and other sources—evaluated the health and competitiveness of the nation’s overall civilian industrial base upon which a strong defense industrial base ultimately rests. 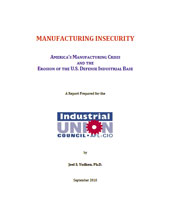 The results of the study have been summarized in a report, now available online (see below). An executive summary based on the full report was publicly released in 2010 and also can be downloaded here. The summary was referenced in testimony, and entered into the Congressional Record, by AFL-CIO Industrial Union Council Executive Director Robert Baugh before the U.S. House of Representatives, Committee on Oversight and Reform Subcommittee on National Security and Foreign Affairs, on September 22, 2010. (The full report and executive summary is also available on the website of the AFL-CIO.)

The paper also was distributed at—and High Road Strategies Principal Joel Yudken participated in—presentations to the Manufacturing Division of the National Defense Industrial Association (by members of the Coalition for a Prosperous America) on October 28, 2010 and the Manufacturing Industry Study group at the Industrial College of the Armed Forces, National Defense University (by the IUC’s Baugh), at Fort McNair, Washington, DC on February 10, 2011.

On April 14, 2011, Dr. Yudken presented the findings of the report at a forum sponsored by the IUC, and co-sponsored by the Coalition for a Prosperous America, the AFL-CIO Metal Trades Department and the Alliance for American Manufacturing, held in the President’s Room of the AFL-CIO in Washington, D.C. Dr. Jerry Abbot, current faculty member and former director of the Industry Studies Program, Industrial College of the Armed Forces, of the National Defense University, and Owen Herrnstadt, Trade and Globalization, International Association of Machinists, were respondents. A standing room only audience of business, labor, and government representatives participated in person, and another 30 joined via the web.

Following this highly successful event, the study received a great deal of attention from the media, other policy organizations, and in Congress: