In the Fall 2012, Environmental Entrepreneurs (E2) commissioned High Road Strategies (HRS) to assess the environmental and economic impacts of the U.S. Department of Defense’s (DoD) program to invest in and pursue aggressive goals for incorporating advanced biofuels into the Air Force and Navy fuel mix.   An affiliate of the Natural Resources Defense Council (NRDC), E2 is a non-partisan national community of business people promoting environmentally smart policy.   The results of this study were summarized in the report, The Economic Benefits of Military Biofuels, released November 10, 2012. 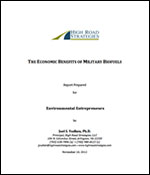 High Road Strategies also joined with E2 in organizing a panel, “The Economic and Environmental Benefits of Advanced Biofuels,” for the BlueGreen Alliance’s Good Jobs Green Jobs Conference, held April 16-18, 2013 in Washington, DC.  HRS principal Dr. Joel S. Yudken served on the panel, along with representatives from E2, the U.S. Navy, U.S. Department of Agriculture, industry, and farming.   (See the April 17, 2013 blog item on this site.)

In addition, on July 12, 2013, Dr. Yudken was invited to speak at the monthly luncheon of the National Capital Area Chapter of the U.S. Association for Energy Economics.   His presentation,  “The Economics Benefits of Military Biofuels,” based on the HRS-E2 study, also included a review of the competitiveness and policy challenges facing the U.S. biofuels industry to reach commercial scale production.   The presentation was also live-streamed by courtesy of Climate Nexus to a large audience around the country.   (See the July 15, 2013 blog item on this site.)

The U.S. military’s alternative fuels program is part of its national security strategy, including energy efficiency and clean energy initiatives—to reduce the military’s energy needs and reduce its dependency on foreign sources of fuel.  Specifically, the Pentagon has set targets for replacing half the Navy’s and Air Force’s consumption of petroleum-based fuels with alternatives by 2016 and 2020, respectively.  The Air Force and the Navy’s goals will jointly require about 770 million gallons of advanced biofuel capacity.  This is backed by a joint investment from the Navy, the U.S. Department of Energy (DOE) and U.S. Department of Agriculture (USDA) to provide $510 million over a three-year period for the development of advanced biofuels to meet the military’s requirements.

HRS constructed a simple input-out model, based on the primary cost structure components of the advanced biofuels value-chain.  A key challenge was to select data points and values based on a comparison and analysis of feedstock, conversion pathways, and biofuel manufacturing plant characteristics, compatible with the production of biofuels that meet the military’s specific criteria:

Methodology.  The study drew upon a wide range of data and information sources, including empirical data from operating or soon to be operating U.S. plants, and detailed engineering-economic studies of facilities that produce fuels that meet these criteria. Because the industry is still embryonic and there are only a relatively small number of studies and real-world examples of “drop-in” biofuels production to draw upon, discretion was required in choosing values to approximate a realistic range of costs and benefits associated with the value-chain sectors.

HRS applied the selected data to its Military Biofuels Economic Impact Analysis (MBEIA) model based on the cost structure of the main sectors of the advanced biofuels value-chain (i.e., feedstock, construction, production/operations, distribution), which was used to calculate the total estimated direct, expenditures and jobs associated with producing “drop-in” biofuels on the scale required to meet the military’s fuel targets. 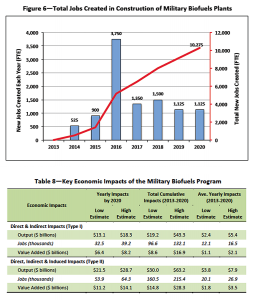 Study findings.  Based on this analysis the study found that the nascent biofuel industry in response to the military alternative fuel targets would potentially create thousands of domestic jobs and billion of dollars in new revenue, especially in states or regions with biorefineries.

The indirect and induced inputs are summarized in the table shown here (Table 8 in the HRS-E2 Study).

Regional impacts.  Although it was not possible to analyze the geographical distribution of economic growth that might arise from the military biofuels program, the MBEIA model could be used to look at the potential impacts of a “typical” drop-in biofuel plant, if it were built in a local region.  In sum, the study found that between 2013 and 2020, a typical 50 million gallon biofuel plant could add as many as 750 construction jobs, 491 permanent production, operations and distribution jobs, and $1.2 billion in output to a rural economy with biomass resources.

In addition, the study calculated that the total value of direct, indirect and induced benefits could reach $3.8 billion of output and 21,000 job-years over the eight-year period, a significant portion of which would remain with in the regional economy.

Conclusion.  The HRS-E2 report findings suggest that the Pentagon’s biofuels initiative could stimulate the growth of a larger biofuel industry that serves civilian as well as military markets.  By attracting private capital into technology development and biorefinery construction, it could accelerate the scale up and deployment of biofuels, making them increasingly cost competitive, providing clean fuel choices for civilian industries, especially commercial aviation.